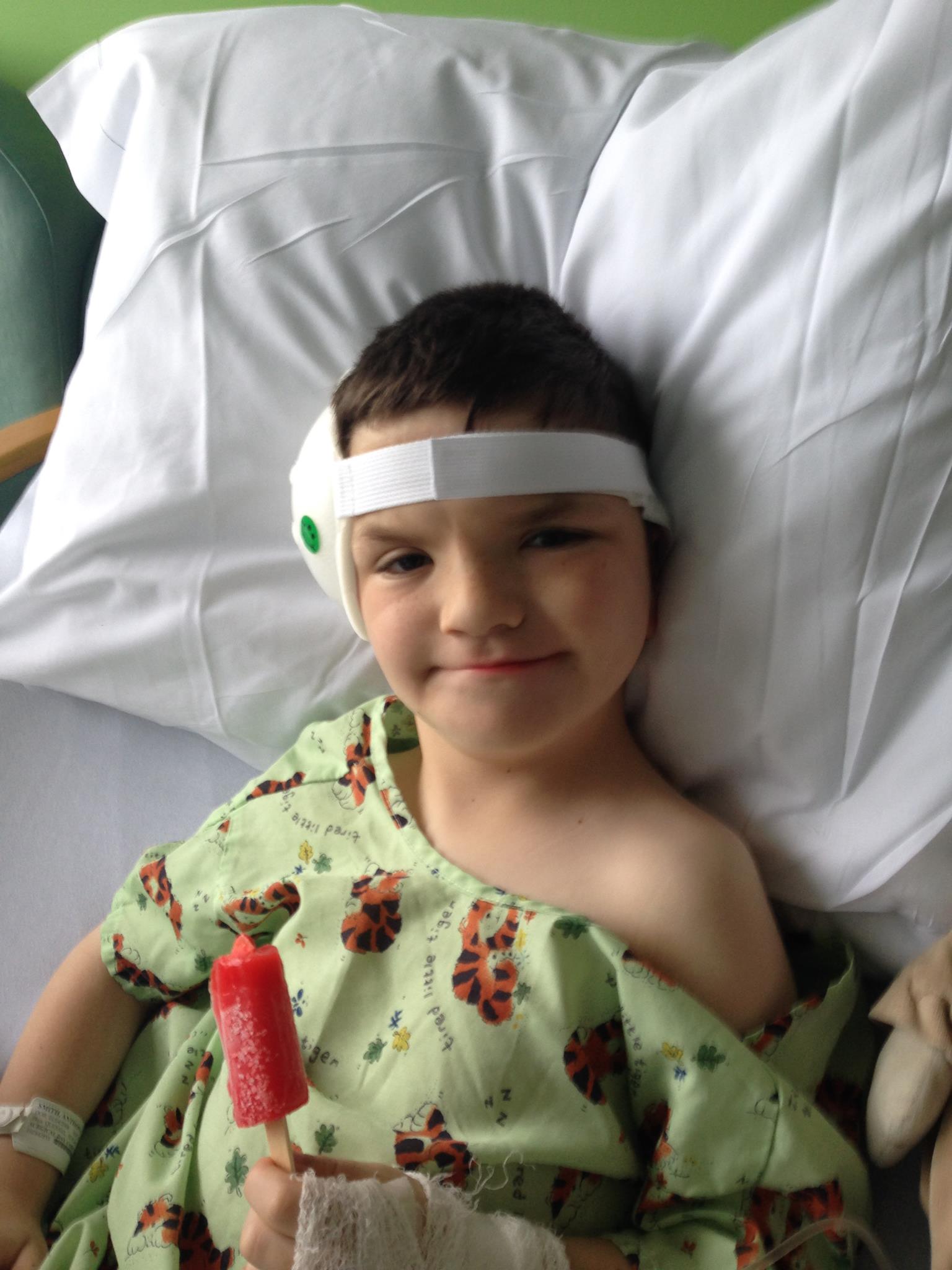 Recently, Anthony had surgery to go from temporary to temporal, having an abutment placed that would allow him to move from a Ponto on a softband to using the Ponto on a titanium implant that sits in the bone behind the ear.

After a long wait, Anthony had stage 2 surgery for his Ponto abutment on May 5, 2015.

“We waited 14 months to try again and we were all so happy to get the go ahead. Working with our provider we decided a two stage surgery would give Ants the best results,” Christina explained.

Two thumbs up for Ponto!

“Anthony is amazed at how much better he is hearing. When we got into a late night shouting match (all in good fun) about Lego, he shouted to all of us – you are too loud!!! First time we have ever heard that!”

Check out the video on Anthony with his Ponto of Anthony testing his brand new Ponto for the first time!

Why Can Anthony Hear Better Now?

The sound processor picks up sound waves in much the same way as a conventional hearing aid. But instead of sending them through the ear canal, it transforms them into sound vibrations and sends them, via the abutment and implant, through the skull.

In this way, the vibrations travel directly to the inner ear, bypassing any problems in the outer and/or middle ear.

We caught up with Christina, Anthony’s mom, to learn more about the experience. Here’s what say had to say—

What were the most challenging moments of the journey from the softband to Ponto on an abutment?

The most challenging moments for my family were the decision to move forward with the surgery and the aftermath of the first surgery.

The decision to implant the Ponto was not an easy one. The idea of putting something permanent into your child’s head is daunting at best. We deeply considered the options available and spoke to anyone we could about the difference between the quality of sound of the softband versus the implant. In the end, we decided that the quality of sound was worth the surgery to get us there.

We were devastated that after much preparation and insurance approvals, his skull proved too thin to perform the procedure at first. We were worried that our insurance would change or that something would stand in the way when Ants’ body was finally ready for the implant. We waited 14 months to try again and we were all so happy to get the go ahead. Working with our provider we decided a two stage surgery would give Ants the best results, and in November we went in for the procedure.

On the day, the recovery was horrible – he had intense nausea and vomiting. We were very lucky that we had our own room and he was given ample time to recover. He has endured many surgeries and this recovery was hard, thankfully we were soon able to get him home and after a good night’s sleep he was back to his old self—in fact, he only missed one day of school to recover.

The second stage was uneventful—he was such a trooper—the hardest part after stage 2 was just waiting to get the appointment to turn him on!

How did you feel when you saw Anthony with the new Ponto for the first time?

He looked so grown up! We were amazed at how subtle the Ponto looks on his head. He likes the Blue skin, which makes it stand out a bit—but he looks amazing!

How did Anthony feel?

He flung the headband across the room like it was an elastic band. He commented that now it would not mess up his hair—and overall he was thrilled to be hearing so much better.

What does this mean for Anthony and your family?

This is the last of the surgeries we were sure Ants needed so for us—we are moving onto the next chapter. If he chooses to repair his Microtia, it will be his choice on his terms. We feel that now with his hearing the best that it can be we can focus on the other non-medical parts of his life. His hearing was his biggest hurdle to interacting and leading a normal social life. It impacted him at school and in other interactions with his peers.

The Ponto on the abutment gives him the best access to sound that technology currently offers. We know we cannot completely take our eyes off the ball—we will continue to advocate for and research the best way for him to interact with the evolving technology in his classroom, but we know we have a great start.

What’s your advice for other parents who are thinking about making the switch?

In the end it is better hearing—and isn’t that what we are all looking for?

We decided that although the softband offered significant improvement for him—we could not settle for good enough—we wanted the best access he could have. The difference was noticeable as soon as we connected the Ponto.

In life there will always be risks and you should never take a surgical intervention lightly, however we felt that the benefits far outweighed the risks. Research your doctor, learn as much about the surgery as you can—and allow ample time to heal—we were desperate to see the difference, but know that I have seen the improvement—it was well worth waiting the months to know it was fully healed.

Interested in learning more about getting a Ponto for your child? Click here to learn more and speak to an Audiologist.