Cierra McCorkell was born with bilateral hearing loss with microtia and atresia on the left side. 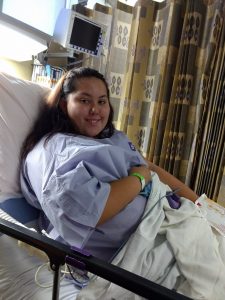 She received her first Ponto Bone Anchored Hearing device in 2012 when she was in 6th grade after her hearing loss had progressed. She began wearing a Ponto Pro on a headband and continued with the headband until she was in high school. When discussing the possibility of surgery, she found the decision overwhelming, and surgery was a frightening thought.

“Just the word alone made her afraid. I have always let her choose for herself when she is ready to do something so this decision was solely on her.” – Theresa McCorkell

While researching bone anchored hearing, Cierra’s mother Theresa found the blog of a Ponto advocate who had written about her recent surgery to have her abutment placed. Theresa commented that her daughter was afraid of the surgery which sparked an online conversation that would lead Theresa and Cierra to Oticon Medical’s annual patient advocacy conference to learn more about the procedure.

Overcoming a fear of surgery
In October of 2016, Cierra and her mother attended the Oticon Medical Patient Advocacy Workshop. It was there, among fellow Ponto users, that Cierra expressed her fear of surgery and where she learned first hand about the Minimally Invasive Ponto Surgery (MIPS) procedure. 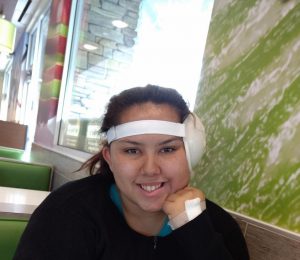 “She had never met anyone like her. But now she saw other children and adults who were doing great with the surgery and that helped her a lot. Cierra was nervous because she doesn’t talk about her hearing loss and we didn’t know what to expect. We had a great time and we learned a lot. She made friends and it opened up a whole new conversation for her to learn how to advocate for herself now that she is getting older.” – Theresa McCorkell

On the last day of the conference, Cierra announced that she had made the decision to move forward with abutment surgery thanks to the stories and information provided by fellow advocates.

Surgery and activation
On September 1, 2017, Cierra was implanted using the MIPS procedure. Her mother comments that the surgery was less than an hour and without complications. Four months after her abutment was placed, Cierra was finally able to snap on her Ponto Pro, which her mother captured in the video below.

“Ultimately, what helped was knowing there are people just like her out there.” – Theresa McCorkell