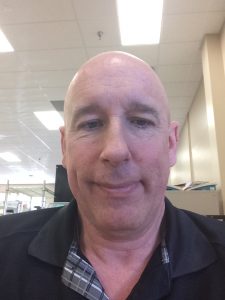 In 1973, a snowmobile accident changed Carl Bjerke’s life. The accident, which resulted in head trauma, left Carl with permanent hearing loss on his left side. “My hearing was never checked and I just didn’t think much of it, and simply dealt with it,” he says.

His first hearing test
In 1980, Carl joined the U.S. Army as a mechanic but never told anyone about his hearing loss. “I had to constantly ask people ‘what did you say’ over and over again,” he says. It wasn’t until 1986 that Carl had his first hearing test and was officially diagnosed with single-sided deafness. He was given a crossover hearing aid, but quickly found it was too loud, especially for his position as a mechanic. “In just a few weeks, I found that it was overloading my good side, and I never wore it again,” he explains.

Trying a bone anchored hearing system
In 2008, Carl’s audiologist suggested he try a new technology—a Bone Anchored Hearing System (BAHS). They gave him a BAHS to try on a headband. As soon as he put the processor on, he noticed a huge difference in his hearing. “I could hear things on my left side that I couldn’t hear before,” he says. Once he returned the demo processor, he began his journey to have an abutment placed for his own Ponto Bone Anchored Hearing System.

“I really researched the units that were out there and was very logical in reviewing all the facts. I looked at all the data and the Ponto 3 SuperPower was the best option for me,” he explains.

A new world emerges
In 2017, after concluding that insurance would cover the cost of his BAHS, Carl had the surgery.Three months later, Carl’s Ponto 3 SuperPower was programmed and activated. He 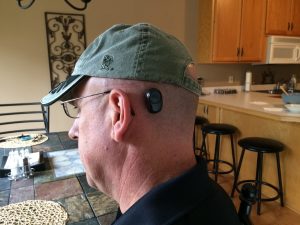 recounts leaving his audiologist’s office that day and hearing his wife speak to him for the first time while she was standing on his left side. “I could understand her without saying ‘what or excuse me,” he says.

Today, Carl works as a quality and safety manager with Diagnostic Group LLC in Minneapolis and no longer has to go to a meeting early to find a good seat so he can hear everyone. “I was doing an audit in Florida and I could carry on a conversation with everyone. Everyone’s voices were clearer,” he says. Using his Oticon Medical Streamer he is able to connect to his phone and when listening to music he says he gets ‘the full range of music’.

To those struggling with single-sided deafness (SSD), Carl says, “There is help for people with SSD. Get your hearing checked, you might also benefit from a Ponto Bone Anchored Hearing System.”

Finding the right hearing solution for your child’s individual hearing loss can be difficult. While research is an important aspect of finding the right solution, we also believe there is power in stories and listening to what others have to say about their experience.  Below we’ve brought together advice from eight parents who chose Ponto for their children. 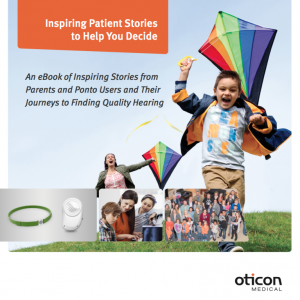 “I just want to make other people aware that there are other options. Check other resources to make sure you are making an informed decision right away. I quickly learned that no one is going to give me all the information I need.” – Caroline Mannato

“Research those (Facebook and other groups) boards. Don’t allow yourself to be saddled with one device because your audiologist doesn’t want to try something different. Fight for your children’s rights. Make sure you know you have options.” – Jillian Shelton

Social media groups can not only provide community but valuable information

“Look to social media support groups on Facebook, like this one and this one, to help research options and talk to adults and who are wearing the devices you are interested in. – Liz Anderson

“Ultimately, what helped was knowing there are people just like her out there.” – Theresa McCorkell

“The stories that adults and older children were telling were the stories we needed to hear.” – Erin Bullock

“Insist on trialing all options. It’s definitely worth the time it takes.” – Laurie Jarvis

“Try all your options, on your child and yourself, to help you make the most informed decision for your family.” – Heidi Jeffs

“If you have an audiologist who is not open to trying a different company, push or go elsewhere – just do your research.” – Liz Anderson

“Advocate, because our children need us.” – Shannon Gordon