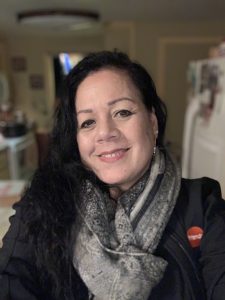 After a slow progression of hearing loss in her right ear, Elizabeth Collins became permanently deaf on her right side from a mastoidectomy surgery at the age of 14. She has lived with single-sided deafness (SSD) for most of her life, struggling to hear in school and at work.

“I had a fear of not wanting to raise my hand in school because I didn’t want to make a mistake. Growing up with single-sided deafness and not having the access or advocacy that we have now meant dealing with a lot of stigmas around being hearing impaired. I had to overcome a lot of insecurity, adversity, and bullying as I grew up,” Elizabeth explained.

The first hearing aids she used were BiCROS hearing aids, but the solution wasn’t enough for her hearing loss. It wasn’t until Elizabeth was 38 years old, when she decided to go back to college, that she began researching new hearing loss solutions for SSD. While completing her associates degree at Tidewater Community college she noticed a picture of someone wearing something behind their ear — a bone-anchored hearing system (BAHS). Audiologists hadn’t presented BAHS as an option, so Elizabeth did her own research, and found BAHS could be the right solution.

Elizabeth encountered her first obstacle while trying to get approval for BAHS surgery —insurance. After her insurer rejected the surgery multiple times,  she reached out to a BAHS advocate who educated her on insurance codes. After two years of fighting, she was finally approved and moved forward with her abutment surgery in 2012.

A year later, Elizabeth encountered another issue when she tried to upgrade her device because she was struggling with the type of BAHS she was using. The device wasn’t helping her in school and customer service was not supportive of her needs. She researched other brands of BAHS and found the Facebook group BAHA World Hearing where she first learned about Oticon Medical’s Ponto bone-anchored hearing system. Elizabeth was given a Ponto loaner to try. She shared her reaction for the first time in a heart-tugging video (see below).

Elizabeth made the decision to switch to a Ponto BAHS and got ready for her next battle — a revision operation to have an Oticon Medical abutment implanted. Two years after she graduated college and began her career as a Contract Specialist at Norfolk Naval Shipyard, and despite confronting more insurance rejections for her re-implantation surgery, Elizabeth finally received her Oticon Medical abutment in October 2018.

Life with her Ponto 3 SuperPower

“Now I get to discuss and elaborate on topics. I do presentations and trainings where before, never in my life would I have wanted to go up in front of people and present. I’m excelling at my job and advancing to leadership roles. The most important difference I’ve noticed is that my speech has improved, my family has started to respect me, and I feel more confident,” she said.

In the end Elizabeth feels the switch was worth it. “Oticon Medical has captured my heart and I’m not going back. When people see my Ponto and ask me what I’m wearing, I let them know that this is my ear.”